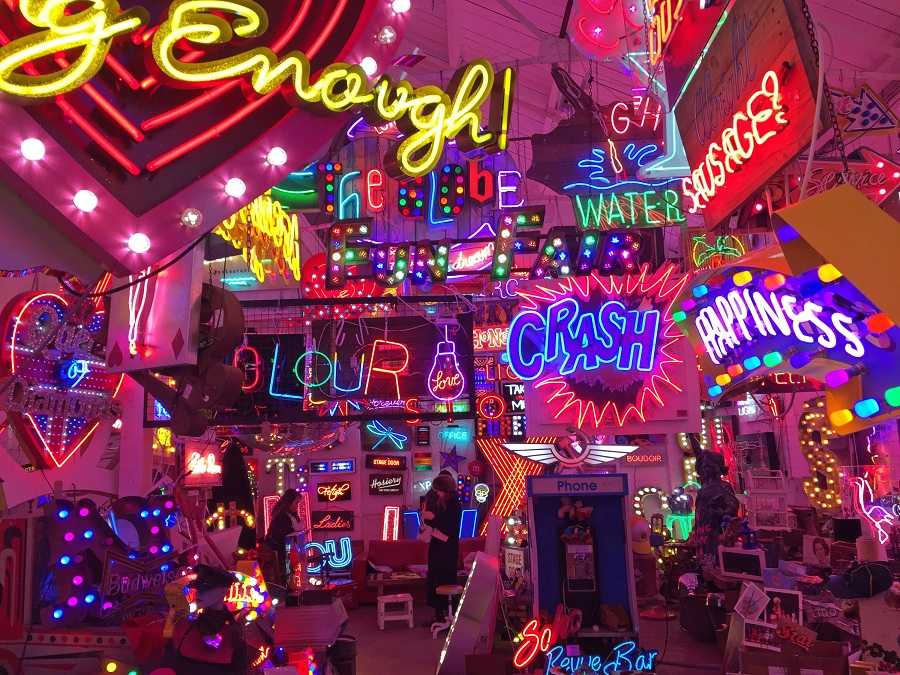 Neon lights up our lives – think of Vegas on a large scale, but pawn shops, barbershops, and bar signs on a more local scale.

Neon can be used for all kinds of applications, such as shop signs (coffee shops, BBQ, pizza, etc) but also for businesses, vintage places, weddings, and home use. Their limitation is up to your imagination!

Neon has grown a lot over the years. It began as charged gas and has evolved into the multi-colored displays we know and love today.

A German glassblower and physicist named Heinrich Geissler invented the Geissler tube in 1855. When a Geissler tube is placed under low pressure, and an electrical volt is applied, the gas inside the tube glows.

By 1900, many types of electrical discharge lamps, or vapor lamps, were invented. These lamps are transparent glass with gas inside, which glows when the gas is energized by the applied voltage. ​

The first iterations of neon lights were created in 1902 by French engineer Georges Claude.

Claude built on the innovations of the Geissler tube by applying an electrical discharge to a glass sealed tube with neon gas. Claude also developed the process of extraction of pure neon from the atmosphere This process involved liquefying the air, which yields neon in useful quantities.

Claude also later invented nonreactive electrodes, which were needed to handle the ions without overheating. These electrodes meant that the lifespan of the neon tube increased significantly, while reducing necessary maintenance. Beginning neon signs were one color – traditionally a dark orange/red.

Claude demonstrated his new invention at the Paris Motor Show in 2010. Claude and his associate JaquesFonseque began to sell the signs commercially and sold the first to a Paris barber in 1912.

Nowadays, neon signs are available in a multitude of colors and all over the country.

The first neon sign in the United States was at the Packard Motor Car Company in Los Angeles. Entrepreneur Earle C. Anthony saw the neon signs in Paris and commissioned in 1923 two signs for his showroom. They were so successful, they caused traffic jams – people stopped in the street to marvel at the glow of the neon lights.

During World War II, neon signs were darkened due to nighttime blackouts. Some remained lit, while many were extinguished forever.

However, neon signs have seen a revival – attracted by the unique look and retro appeal, sign makers have begun to use neon to accent buildings and sculpt light.

Today you can purchase neon signs for many applications, such as custom signs for your wedding, your favorite sports team, or for your business, shop, or salon. No matter the application, there’s a beautiful, colorful neon sign for it.

What Is 5G and What Benefits Will It Bring?